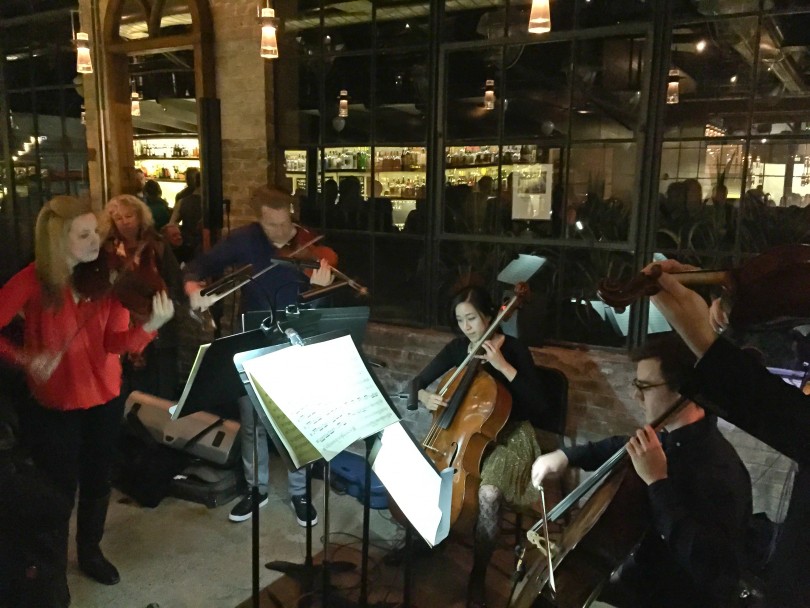 Members of the Utah Symphony, operating as MOTUS After Dark, are winning over unexpecting listeners with a series of live classical music performances this winter at local bars in the Greater SLC.

I remember attending my first classical music concert. I was in my twenties. It was in Pasadena, California, and I sat very near the front row. I recall one piece early in the performance—a violin concerto I believe—that mesmerized me. It sucked me in and I was lost for the rest of the concert.

Afterwards, for many months, I tried unsuccessfully to replicate that feeling. I was a die-hard rock ‘n roller, but I decided I needed to expand my horizons. So I listened to classical music radio in my car. I listened to classical sampler CDs—the freebies used to demonstrate the capabilities of CD players. But I was never able to recapture the emotions of that day. Until I went to my second live concert.

I realized then that, for me at least, it was the live performance that triggered the response. The vibrations of the sound, the emotion of the musicians. The connection to history. And by finally understanding this, I found the confidence to tell people not only that I loved classical music, but why.

And so it was last Friday, when I was invited to attend MOTUS After Dark by my Friend David Gray Porter. Porter, and his fellow MOTUS, had recently been experimenting—in a somewhat unofficial capacity—by performing in bars around the Greater Salt Lake area. And it was on this night at Under Current, MOTUS After Dark kicked off a string of official appearances.

This was not the type of music they typically sought or expected to find on the SLC bar scene.

During the performance, I spotted a several people in the audience who were caught off guard and blown away by what they saw and heard, just as I had been so many years ago. This was not the type of music they typically sought or expected to find on the SLC bar scene. But they will remember this performance for a long time, and their lives will be richer as a result.

And to all of you Wasatch Riders out there: I recommend you skip one of the oft-mundane slope-side music offerings this winter, and check out one of the upcoming MOTUS After Dark events:

Based on the turnout and response I have seen, I expect to see more MOTUS After Dark events popping up in the future. For more information, visit motusafterdark.com.