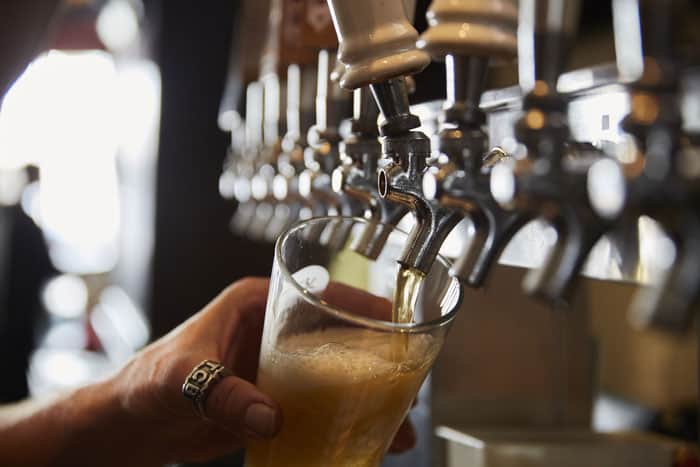 Utah widely perceived to anti-alcohol, but Utah beer and brewing in the beehive state have a long history.

My wife hates beer. If it was the only liquid she had access to on a deserted and arid island, she would die of thirst. I’m the weirdest beer drinker. I down a lager when my stomach is upset, and in the summer I’ll drink one over ice from time to time. No Guinness for me. That’s like drinking a glass of liquid wheat bread. So why would I pen some words on beer? Because the history of Utah beer makes for fantastic trivia!

Mormons (and some other religious folk) aren’t supposed to imbibe. Joseph Smith declared in 1833 that Mormons should not drink or smoke, but they could use wine in sacrament meetings. When Mr. Smith died, his spiritual heir, Brigham Young, led the faithful to Salt Lake City, where within three years two breweries opened—Beach and Blair, and City Brewing. Ten years later, Mark Twain came to the City of Salt to check out a famous Mormon creation known as “Valley Tan,” which was a kind of whiskey being produced here.

Breweries popped up as the population grew and immigrants arrived to work in the mines. The Cache Valley Brewing Company opened in Logan in 1879, and in 1884 the Fisher Brewing Company at 1206 West 200 South in Salt Lake began using water from the Jordan River to make it’s brews. There were other breweries along the Wasatch front, in cities like Ogden, Provo, Manti and Alta.

Babs in the City – A Short History of Utah Beer

The Salt Lake City Brewery, which opened in 1875, was one of the largest breweries in the Western United States, and Brother Brigham loved the tax revenue that beer funneled into state coffers.
In the 1920’s, alcohol was determined to be the drink of the devil and was outlawed from 1920 to 1933. There was no legal beer or alcohol during Prohibition in the state except for those products sold as medicines by pharmacists and doctors. Utahns could legally drink 3.2 beer again on New Year’s Day in 1934.

Fisher Brewing closed in 1967, and for the next 19 years no more beer was brewed in Utah until Schirf Brewing opened in Park City in 1986. Three years later, brewpubs became legal in the state, and breweries and brew pubs just kept on fermenting.