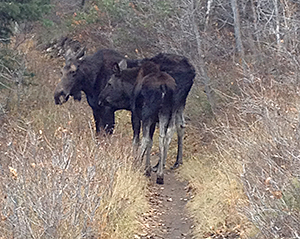 If you happen to ride the Wasatch Mountains as frequently as I do—and it isn’t hard to do that— you will encounter wildlife. This is one of the truths that makes the mountain lifestyle so great. There is little need to visit the zoo, when it exists in your back yard. But obviously there are rules that we must live by, in order to keep ourselves and wildlife safe.

Last spring, while riding up Flying Dog Trail, I ran into one moose climbing from the Glenwild residential area, and then a second moose while descending on the frontside facing I-80. Both moose were too busy eating to pay me much mind. So there was no fuss. No tentative dance—trying to figure out how best to proceed. I watched the munch fest for a minute, then got back underway. Nobody, or nothing, was required to alter their plans,

But later that fall, I encountered two moose on Collin’s trail, above the Sun Peak residential area (see the two culprits in the photo above). As I was heading west, and approaching the last switchback before the Rob’s trail junction, I came upon them. There was a mother and what appeared to me a 2-year old, standing in the trail and apparently unwilling to move on.

During the next 20 minutes, I tried every known method of gently motivating them to move on. Let me qualify this by saying I have encountered many moose in the past 15 years—from my old home in the Tetons and Big Hole Mountains along the Idaho/Wyoming border, to my more recent home in Utah’s Wasatch mountains. I’ve heard many horror stories and, believe me, I was ready to hop on my bike and break all downhill MTB records. But thinking this could be one of my last Wasatch Back rides of the season, I figured there had to be a safe way for human and wildlife to coexist on this trail.

I tried everything from ringing my bell and making dog-like woofs. After five minutes or so, they finally moved off trail. But they moved uphill and, of course, they were there waiting from me shortly after that last aforementioned switchback. So for the next 15 minutes, I got creative and tried other methods including stomping my feet my feet and tossing pebbles into nearby brush. The best I got was 30 feet of movement by the pair, only to be waylaid by an edible bit of bush. It was basically a standoff.

Eventually, two hikers approached from the opposite side of the trail, effectively sandwiching the moose between us. This unplanned pincer move finally convinced the moose to move off trail and away.

A few minutes later, still climbing up Rob’s, another ride informed me that there were more moose at the top near the Ambush junction. Oh well. I altered course, heading down Rob’s to the Bear Hollow Road trailhead, the up and over to the UOP trails. As I rode, I determined that this would indeed be my last ride on the Wasatch Back. Several moose call this area home, during the fall and winter. The least I could do was do a bit of my own migration and give the moose some space.

The whole affair got me to wondering if I had broken a rule—some section of the wildlife etiquette book that I had not read. Wildlife has the priority…I get that. But there should be times when both parties can safely have the trail. But how?

Perhaps, one day when people actually visit this site and comment, I will return to this post and find some great stories and tips on how to handle wildlife on the trail. See you out there!