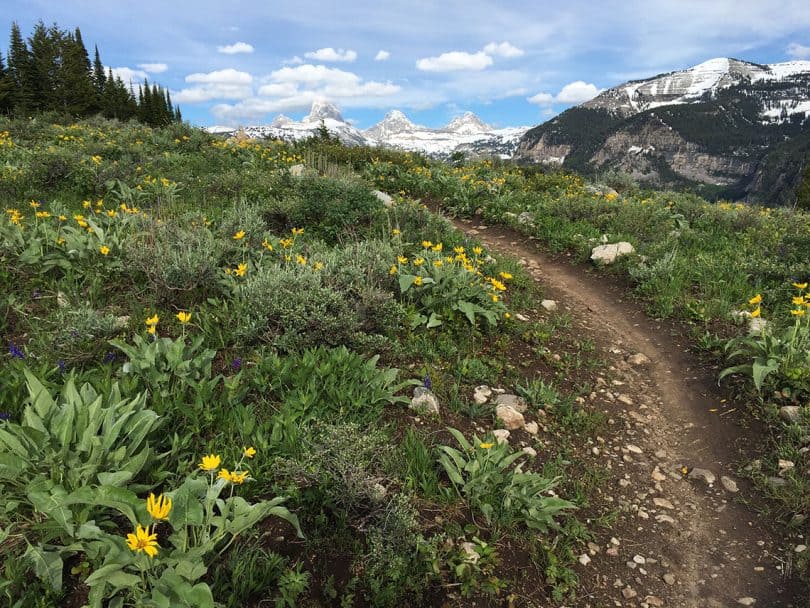 I REMEMBER THE first WYDAHO Rendezvous Teton Mountain Bike Festival in 2010. Started as a fundraiser for Teton Valley Trails & Pathways, the first year was small and mostly local. Social gatherings for the event were held in downtown Driggs at the Community Center. Everyone got together to drink a few beers, get to know each other, listen to live music and participate in the crazy fun races organized by Fitzgerald’s Bicycles.

The second year event saw a noticeable increase in attendees and, more importantly, an increase in visitors. It didn’t take long for Grand Targhee Resort, and other tourism businesses in the valley, to notice that the festival was attracting people from around the region. Utah license plates have long been abundant in the valley—Targhee is a favorite Utah resort after all. But more and more began to appear. 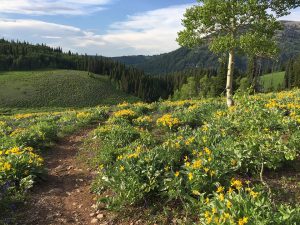 Like all resort towns, tourism is the lifeblood of Teton Valley. It seems the first two years of the festival really opened up the eyes of Grand Targhee Resort owner Geordie Gillette. The economic promise of growing MTB tourism was a Godsend for any ski town looking to capitalize during the off season and the idea of sustainable business has always been important to ski resorts.

But Geordie had a bit of a problem. Back in 2010, there were only a few trails at the resort—a couple options in Rick’s Basin, and a couple downhill options from the top of Fred’s Mountain and the Dreamcatcher lift. It wasn’t long before he gave the green light to his new trail boss, Andy Williams. Since then, every year more and more trails magically pop up at the resort. In a few short years, Grand Targhee Resort became a true MTB destination and it made perfect sense to move the festival up to the resort.

The early years were all about group rides around the valley. The trails in the Big Hole Mountains to the west and the Snake River range to the south, alone, are worth the trip to Teton Valley. But with the addition of new trails, hosting the event up at the resort made a lot of sense and gave riders a convenient place to camp, party and ride.

I snuck up to Teton Valley in late June and early July, to get an early look at some of the newer trails and reroutes at Grand Targhee Resort and the surrounding area. I mentioned Utah’s affinity for WYDAHO, so I figured this would be a great opportunity to prime the pump for the festival and launch Wasatch Rider’s first MTB travel feature.

As I was rolling in to the resort, an old friend and VP of Ski School Operations Mark Hansen texted me and said I needed to check out two new loop trails off of Jolly Green Giant. Jolly Green Giant has been a nice warm up for bigger rides at the resort but I quickly learned the addition of Yeti and The Core loops have made Jolly Green Giant a lot more fun, and a bit more challenging.

Targhee lists Jolly Green Giant as an intermediate ride, but at 2.3 miles and about 450 ft of elevation gain, it’s closer to a beginner ride. The two new loops include some intermediate jumps and banked turns, so you can easily spend an hour and a half riding and playing in this area. I failed to map the new loops, but we’ll plan on a proper review in the near future.

Grab a resort trail map and get oriented. Start at the Greenhorn trailhead, next to the resort entrance, and plan on riding Jolly Green Giant counter clockwise. Right before you reach the west trailhead junction for Jolly Green Giant, jump on The Core and do a counter clockwise loop. Both ends of The Core join the main trail within a few feet of each other, so you won’t miss the turn. Riding this trail counter-clockwise lets you take better advantage of the banked turns and jumps. Clockwise is fun as well but, if you slack off, you won’t have the speed to clear the jumps on the descent. The Core is about a 15 minute loop and I did the loop both way just for kicks.

Riding this trail counter-clockwise lets you take better advantage of the banked turns and jumps.

As you reach the end of  The Core—going counter clockwise—your trajectory will send you right up the Jolly Green Giant west trailhead. The trail has an intermediate climb that winds through the woods and circles the hill, taking you to the back side which opens up facing west, offering great views of Teton Valley, Driggs and the Big Hole Mountains beyond. Stop and get some photos.

As you wind around and start heading back towards the base area, you’ll come to the second new loop called Yeti. Hang a left at the first trailhead and do this trail clockwise. Both directions have nice banked turns, but only the clockwise direction has jumps on the decent. Finish the Yeti loop and head downhill for some fast and fun banked turns back to the resort entrance. This adds another 10-15 minutes or so to the ride.

I think this makes a perfect Friday afternoon ride after driving up from Utah.

The Other Mill Creek

I also heard about some recent reroutes on Mill Creek. The Mill Creek trail pre-dates the Grand Targhee Bike Park and sits just outside the resort boundary, with its lower trailhead in Teton Canyon. Reroutes have eliminated the straight up grind that used to dissuade a lot of riders from riding uphill from Teton Canyon. Combined with Coulter’s Escape, you’ll have about 1600 ft and 9.6 miles of climbing. 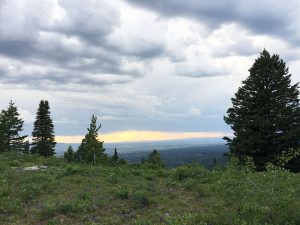 To loop from this starting point, riders often pedaled up Ski Hill Road to the resort, jumped on a cat track and hit Mill Creek for the downhill. But the reroutes make this a great out and back ride. The trail is a good advanced burn and all technical spots are negotiable. About halfway up, you bust out to a fantastic three peak Teton view. The trail also passes an old lava flow that is off limits now but used to provide downhillers with interesting technical features.

Once at the top, and if you have the legs, there are a lot of options. 38 Special and Peaked trails both take you up to the top of Peaked Mountain. Andy’s and Action Jackson take you to the resort base. On this day, I peeled off to explore Rocky Mountain Way. Rocky Mountain Way has some very nice banked turns, making the downhill trip a blast.

Rick’s Basin is just north of the resort base and includes the resort’s previously mentioned oldest trails. But as many of you know, a lot of new trails have been built over the years and Rick’s Basin has enough options to keep you busy for a few hours.

To get there, take Pika Traverse right from the base of the Dream Catcher chair. Pika is a beginner trail that starts off with an easy climb. On my ride, I had to detour as the trail crew was doing a bit of rerouting just before the new Blackfoot chair. Once past the chair, the trail continues up to Rick’s Basin, another beginner trail. 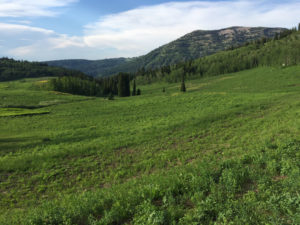 Rick’s Basin is relatively treeless on the south end.

The south end of Rick’s basin is relative treeless, but after a bit of fast riding—heading north—you’ll arrive at the Quakie Ridge trailhead. Quakie Ridge is an intermediate trail and it quickly enters stands of Aspen and Pine. Arrowleaf Balsamroot and other flowers I cannot name were exploding and the views were amazing. After less than a mile, I jumped on the relatively new North Woods trail loop, which loops off of Quakie to add an optional 15 minutes to the ride. Going clockwise, the loop adds some intermediate climbing, then a quick drop weaving through the trees back to Quakie Ridge.

I continued on the Quakie Ridge for a nice intermedia burn climb that takes you around a hill where, once again, spectacular views of the valley and Big Hole Mountains away. I believe I passed a bench up there. Take a few minutes to enjoy the view. Try to spot Horseshoe Canyon and consider heading that way as an optional ride during your visit.

PRO TIP: Pick up a copy of the Teton Valley Outdoor Guide and Street Map. This map—avaialable at most retail locations—shows you how to get to all the trailheads in the Valley.

Once you descend, you come the to new Snowdrift trail loop. I did not ride this trail, sadly, but like the other new loops mentioned, both ends of the trail stary at the same point. As you head back to the base area on Rick’s, you find one more option. The Yogi trail is a quick option that drops you in the lower parking lot.

All told, these new loops at Grand Targhee are great becasue they allow you to taylor your ride time. As I mentioned in the beginning of this article, the resort offers a lot of great services. Ask for my buddy Michael Woodruff in the bike shop. If you’re looking for lunch, grab a sandwich from Snorkels and a PBR from the General Store, and eat on the main plaza. If you’re lucky like I was, you’ll see a rider or two get rekd on the last turn of the downhill course. And at the end of the day, grab a Snake River Pale Ale and nachos at the trap bar.

Remember Utahn’s—draft beer in Wyoming and Idaho are high pointers, so take it slow!