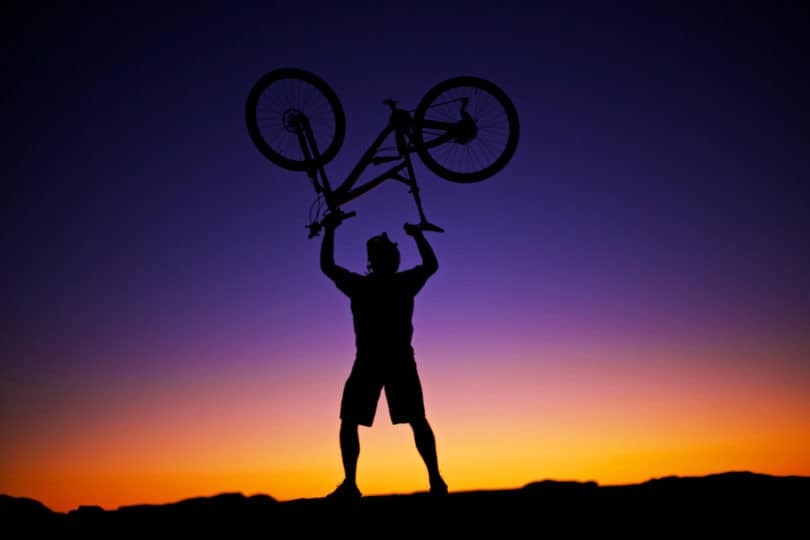 Endurance Race Nutrition is critical. Learn how Aaron Gulley eats in preparation for a big endurance mountain bike race. His challenge is how to stay fed and hydrated for the duration?

Your hydration needs are fairly straightforward. Like with any cycling event over 90 minutes, aim to drink 18 to 24 ounces of liquid per hour containing 250 to 300 milligrams of sodium (with an additional 100 milligrams coming from food), says Kelli Jennings, a registered dietitian with Apex Nutrition. If you weigh more than 180 pounds, aim for 24 to 32 ounces.

Food is a bit more perplexing. While an athlete can burn 1,000 calories per hour or more, the body can’t process that much nutrition while exercising. For efforts over five hours, Jennings suggests between 300 and 400 calories per hour that includes a mix of carbohydrate sources (glucose, fructose, and maltodextrin), but experiment to see how much food your body can handle.

A host of companies advocate separating hydration and fueling to prevent dehydration and intestinal distress. A 2009 study at England’s University of Birmingham showed that optimal fluid absorption came from drinks with just a three percent concentration of carbohydrates, while more concentrated drinks slowed the rate of absorption.

Citing such research, Osmo Nutrition and Skratch Labs, in particular, push athletes to hydrate with their low-concentration drinks and feed on solid food. Allen Lim, Ph.D., of Skratch, along with BMC Racing Team chef Biju Thomas, have published two books with recipes for portable foods to eat while racing such as these cashew and bacon rice cakes.

In this strategy, you would shoot to consume 24 ounces of Skratch or Osmo per hour and take care of the your caloric needs with solid food. If you don’t have time or energy to prepare homemade bars, a few good options include the new ProBar Bolt energy chews, bars and waffles from Honey Stinger, and the almost-like-homemade Kep’s Balls.

Some companies insist that they can deliver all the calories an athlete needs (plus electrolytes and other minerals) in a formula that’s right around the optimal three percent mark. Infinit Nutrition has been customizing sports drink formulations since 2006, and last month they launched a line of stock drink mixes. A single bottle takes care of both hydration and nutrition so there’s less to think about and mess with while you’re riding.

We’ve been testing both Infinit Go Far as well as a couple of the company’s custom formulations, and we’ve so far found the drinks to work well in events up to 12 hours. Infinit also cites studies that show consuming a sports drink with multiple types of carbohydrates, like theirs, can increase fluid absorptionand allow the body to absorb more calories than drinking one with a single type of carbohydrate. Another all-in-one liquid fueling product that we’ve tried with good success is Carborocket 333, even though it contains only one carbohydrate source, maltodextrin.

The truth is there is no one right approach. That means it’s time to start experimenting with the options when you train. Start with the basic recommendations (18 to 24 ounces of fluid and 300 to 400 calories per hour), and practice feeding consistently during rides (think: every 15 minutes). Pick an approach (liquids only or liquids and solids) and follow it until you figure out which products work for you.

On race day, have a plan for the number and types of calories and bottles you’ll need, and coordinate accordingly with your support crew (or the race-provided aid stations). Consider having a back-up product in case your chosen fuels aren’t sitting well, and carry a few hundred extra calories for emergencies, too.

Most important, be vigilant to eat and drink every 15 minutes—it’s easy to get sidetracked and forget your nutrition in the excitement, which in an event this long will inevitably lead to you bonking.