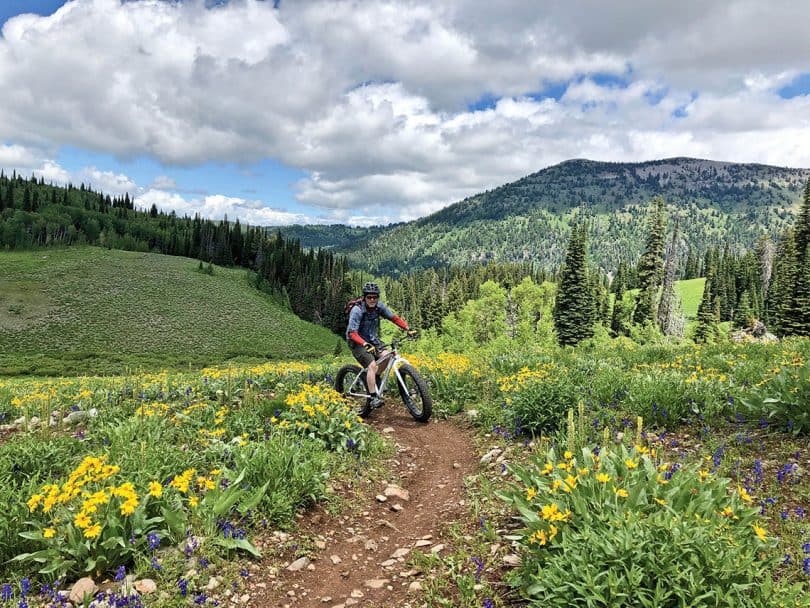 After years of knocking them, making the leap to purchase my first fat bike took some serious deliberation. I chose a a zero sus 1×10

It all started in Vernal. The weekend riding and camping at McCoy Flats was great great fun, but the not-so flat part of McCoy broke my bike. A Saturday afternoon crack in the chain stay of my Stumpjumer FSR and my weekend was pretty much done. It was time to consider buying my first fat bike.

Normally, buying a new bike would a reasonable response, but a carport conversion-to-garage project was sucking up all my money and it was looking like a new full sus bike was not in the cards. It was only May and now it was looking like my summer might be done as well.

Over the next couple weeks, I considered repairing the bike, but finding someone to weld my out-of-warranty frame was proving to be a challenge.

Then a thought occurred to me: I had been looking at fat bikes and knew I could pick up a used zero sus fattie on the cheap.

Nothing is really new with a basic hard nose, hard tail fat bike. The tech is pretty much old school. While searching the classifieds, I was seeing used aluminum frame fat bikes for under a grand.

But what would I do with a fat bike in May?

I had actually started looking at fat bikes in January. I let a few great deals slipped through my grubby fingers and by April I had pretty much missed the fat bike season.

But again…what would I do with a fat bike during the summer? Take it to California and ride on the beach? Nope. I’m a Californian and, sorry, but I’m done what that state. Once I moved to Idaho—and then Utah—I found little reason to return to the Golden State. They don’t even have Grizzly Bears any more.

So I was desparate and broke. I don’t want to bemoan that last fact. It really came down to priorities. I needed a garage more than I needed a bike. But perhaps I could have both. After all, despite a touch of tennis elbow from hammering hundreds of nails, I had saved a LOT of money by doing all the garage conversion work myself. So I could justify buying a fat bike for what…$500?

There was another consideration. I was always repulsed by those assholes who rode fat bikes all summer. Look at me! I’m on a fucking heavy bike and I’m riding the same trails you are. I get it. Your a beast. Asshole.

But I realize, now, that maybe they were as bike poor as I was, and they only had one bike. One fat bike. Hmm….

I was in Teton Valley Idaho working on a project and I stopped into Fitzgerald’s Bicycles in Victor Idaho. What harm could it do talking about fat bikes? I was looking for someone to give me more reasons why a fat bike would be okay for the summer.

I had long criticized fat bikes. Why would someone ride a fat bike in the snow when they could ski?

Did I tell you I was broke? Winter 2017/18 was the first winter season I didn’t have a season pass. Buying a home does some weird shit to your head. Plus, I had moved from Park City to the Wasatch Front and I really wasn’t liking the idea of fighting traffic to get in my turns.

I digress. I’m in Idaho and talking to the pros at Fitzgerald’s, and they have their fat bikes all dressed up for bike packing. Hmmm. I could justify owning a fat bike by claiming it was an adventure bike. That way, nobody would make fun of me like I used to make fun of other summer fat bikers. I know it’s just a mind game, but I needed help making the decision.

The adventure bike/bike-packing thing actually made a bit of sense to me. I’m not a spring chicken and two mishaps: a broken collarbone AND a spinal fluid leak—resulting from two separate crashes—had me rethinking. I need to go farther, slower. I need to stop chasing 30-somethings down the trail.

Adventure biking had a ring to it, but I still could not convince myself that bikepacking would justify my riding a fat bike all summer. But when one of Fitzgerald’s  guy told me I could throw a 27.5 Plus wheelset on the bike for the summer, and swap out the mechanical disc brakes for hydraulic, the light went off.

Full confession; The guys at Fitzgerald’s convinced me to buy a fat bike, But I still could not afford a new bike. Fast forward to May and I picked up a used 2017 Framed Wolftrax—with only one ride—from a rental shop. Six bills. For that price, I wouldn’t care who made fun of me. I was on two wheels again.

Then I took my first ride.

Holy crap. What had I done. I went for a ride in June, on the Pipeline trail up Mill Creek Canyon. I thought I would die. I had parked at the winter gate and barely made it to the trail head—what is that…2 miles? I knew the 1×10 setup would be a challenge, but it was more of a challenge than I had thought it would be.

But I did make it to the trailhead. Once I got on the trail, I quickly learned that I would need to adopt an entire new riding style if I was going to make the bike work. I found I needed to stand a lot more on climbs and descents. Legs were not enough to act as shock absorbers. I needed to anticipate the terrain more than I had in the past, and overcompensate.

As the weeks and rides rolled by, I began to adapt and climb better. Even the downhill and technical sections came easier.

I still haven’t bike-packed yet. I picked up a Salsa EXP Series Anything Cradle Kit and assessed my camping gear. There are a few more pieces of gear I need before I make the leap, but I’m getting close.

And I’m still not 100% sold on my first fat bike, but she has given me some great summer rides so far. With a promise of some overnight adventures in the near future, at least I am not second-guessing the purchase.

If you are new to fat biking, check out some recommended gear. If you are looking for a fat bike check out the top fat bikes of 2019.

Update: We polled our readers and asked “What are the 3 most important pieces of equipment you should get (besides a fat bike) when first getting into winter riding? See what they said.